Thanks to Colin Maclean from the Journal Pioneer for the support and great article!

In a cozy little workshop, down a pretty little road, lives a fox.

His name is Jax and he’s looking for a home.Crystal Stevens, of Redrocks Pottery in North Bedque, shows off Jax, one of the individually named creations from her PEI Fox Mugs brand. – Colin MacLean, Journal Pioneer

He probably won’t have to wait long before he’s adopted. His siblings have proven quite popular lately.

Which is good news for Jax – and for his creator.

He was hand-thrown by Crystal Stevens, owner and artist of Redrocks Pottery in North Bedeque. 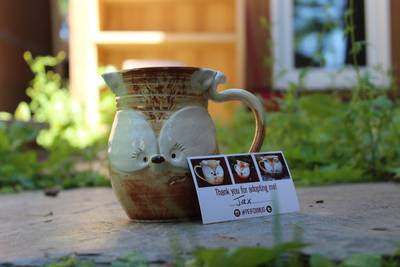 Stevens launched her PEI Fox Mug brand about a year ago and a combination of word of mouth and being featured by Made in the Maritimes, which has a huge social media following, has made the stoneware items a popular seller.

As a small business owner Stevens is happy to have a popular product she can build on. But even more so as a potter and artist, she looks forward to each new batch of PEI Fox Mugs.

She does a lot of what’s called ‘production pottery.’ Which means she gets contracted by larger pottery producers to help make their products so they can keep up with their orders. It also means she has to make those items to her buyer’s standards and dimensions. It’s repetitive. 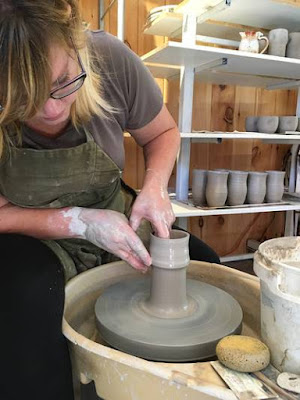 She has her own line of pottery as well, making all manner of household items and beyond. But it’s with her PEI Fox Mugs where she truly gets to play at her craft.

Each mug is the same basic design, but each is also unique. Some are tall, others stout. Some have frowny faces, some have mischievous faces and so on. She’s even working on a line of silver fox mugs, in a nod to the area’s silver fox fur farming history, but it is still in the development stage.

Because each is unique she felt it was only right to give each a name to reflect their personality.

Each mug comes with a card with its name attached and thank you note for adopting the mug.

Some customers also like picking out their own names for their mugs, or buying a certain mug because it’s personality matches someone they intend to gift it too.

“It’s kind of silly, but it makes me happy,” said Stevens.

“When I throw fox mugs, I just sit at the wheel and throw whatever I feel.”

The relative success of PEI Fox Mugs, and her other work as well, is a great source of pride for her. She started Redrocks Pottery in 2014 and only started at the craft in 2012, using old, second-hand, equipment in her spare bedroom.

That was a difficult time her in life, she said, and pottery gave her an outlet.

“I couldn’t control anything in my life at that time. But I could control that, I could make pottery,” she said.

“I was so happy that I found something I love to do.”

Anyone interested in adopting a PEI Fox Mug, which are $42, or checking out Stevens’s many other offerings, can do so online at her website www.redrockspottery.ca. She also regularly updates her www.facebook.com/RedrocksPottery page whenever there is another batch of mugs.

She also has open hours, noon to 4 p.m., Thursday, Friday and Saturday at her shop at 120 Highview Rd in North Bedeque.

What Drives Your Creativity

We are all born creative beings and from the day we come out of the womb, we are challenged to find our creative strengths. It seems everything we did as toddlers are either praised or Read more…

Thank you for your patience as our retail online store has been temporarily closed.
However we are now restocking product that will be available for shipment and local “PARKING LOT” pickup
in North Bedeque. We will be providing details soon! So please check back and/or sign up for our Newsletter. Dismiss